Posted over 5 years ago
Back to Blogs

We finally caught up with the newest - and youngest - world record holder from the Marathon Des Sables 2017 in support of Walking with the Wounded - Oscar Daglish.

In April, he was part of a team of 24 that braved what's known as the 'toughest foot race on earth' to raise funds for Walking With The Wounded who support veterans in regaining independence with new careers.  The Marathon Des Sables (MDS) is a multi-stage adventure through an inhospitable environment and that is only part of what makes this race the stuff of legends.

- water is rationed and exceeding your limit will get you a time penalty!

After crossing endless dunes and white-hot salt plains, running from the Saharan morning sun into the dusk and dark, Oscar beat the pressure and the heat to cross the finish line as the youngest ever to complete the challenge.

Why on earth did you take on this challenge?

"WWTW was co-founded by my father, so I knew of their events and the work they do to rehabilitate soldiers into a working healthy life.  It's extremely important - even if we arent' at war, the problem is still present and the public need to see that.  Following in my father's footsteps, I hoped to create memories that I would never forget and inspire others to do the same." 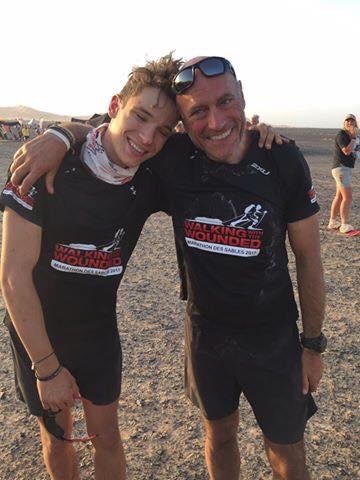 Is the world record title important to you?

"I'd be lying if I said it doesn't appeal to me that I am the youngest to ever complete the MDS - it was part of the challenge that appealed to me.  However, even if I weren't, it was an amazing challenge and it was a privilege to run (walk to be more truthful) with some of these amazing servicemen/women as well as those raisign money for the charity."

What do your friends think?

"My friends think I'm crazy to be perfectly honest but they are also really supportive and have really encouraged both through my training and the actual MDS".

Who or what was your inspiration?

"I have the utmost respect for anyone crazy enough to even consider taking on the MDS however my father, Duncan (a double amputee veteran), Tom Evans (the first Britian to ever come top three) stand out due to the adversities they all overcame.  They really helped me in doing so well but that's not to say that the whole team, who without, I probably wouldn't have done it."

You said you didn't want to grow up not knowing how far you could push yourself, how much training did you do?

"I did cross country three times a week, as part of school; and then I did a few marathons in Cornwall, as well as one double with my dad during weekends and holidays.  The rucksack I carried was 7.5kg and the maximum weight is 15kg, so physically it came down to a lot of training.  Mentally it is a different game.  Here it comes down to how badly you want to cross the finish line.  Mentally I was strong but without the help of those around me I would have struggled immensely."

Did you feel prepared?

"The day we flew out whether I was or wasn't, was not going through my head.  I couldn't change the outcome so I might as well just give it my all and see how it goes."

The heat sounds like it was intense, did anyone get sick?

"Obviously there comes a point where if you are too ill it's better to be pulled off the course, however I was prepared to put up with anything minor.  There was a man who fractured his leg and still completed the last day and I would have hoped to emulate the same strength if that happened to me.  Getting sick of my dad is a daily occurrence so I was used to that!"

You managed to make it all the way to the final finish line, did you have a goal in mind for how long it would take you to complete the race?

"I'm not sure how many steps we took, but my dad kept track of the distance and time with his Garmin.  The motto going through my head was complete not compete; however towards the end I was more competitive and in the end came aroudn 600 out of 1100 competitors'ish."

Oscar is such an inspiring young man and is hoping to go into medicine to one day become a surgeon.  Clearly helping others is a trait that runs in the family.  Walking with the Wounded documented the whole experience and you can check out the stories of Duncan Slater (the first ever double leg amputee to complete the challenge) and the others that took part in the MDS journey by clicking here.

For more on supporting and re-skilling our wounded to find new careers, you can find out about the different expeditions for donating or fundraising for the charity here.  WWTW is a member of Contact, a Charity Partner of Heads Together - the mental health campaign founded by the Duke and Duchess of Cambridge and Prince Harry - and as May is Mental Health Awareness Month there are a plethora of news articles on and offline to gain more information.  Mental health is such an important topic and we should all be doing more in an effort to change the national conversations around psychological problems.

*Pictured - Oscar with his father Simon Daglish after they completed the 2017 MDS race.

Top 6 Reasons Why You Should Use A Recruitment Agency

In a world so significantly impacted by a global pandemic, we know that many companies are feeling the squeeze. The economy has been hit hard and w...

One of the most significant decisions that you will make for your career as an account director is whether you want to work in-house or for an agen...

How to Work from Home Successfully Outside the Creative Setting Is your creative team working from home, away from their usual creative environm...